Dukkah, what can I say, one of my favourite ingredients for so many things!

This is a totally non traditional recipe, no hazelnuts and no roasting of spices but it works for us and keeps in a jar for a couple of weeks so this is the minimum quantity that I make.

a pinch of ground cinnamon

In a frying pan, toast the nuts until just beginning to colour. Tip onto a plate to cool.

In a large mortar and pestle, crush the nuts so that it’s mostly powdery with a few bigger pieces, don’t over do it or it will be oily and stick.

Taste and add a little more salt if needed.

Store in an airtight container. 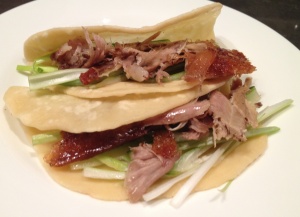 This is my take on a restaurant classic.

The pancakes are made two at a time as you separate them just after cooking, such a clever time saving method!

The boys love the whole concept of making their own pancakes and I just use shop bought plum sauce to go with it, hoisin sauce works well too.

The long slow cook ensures you can shred the duck easily and make sure the crispy skin goes in too.

I know the pancakes have gluten in them but I serve this with some white rice and stir fried veggies for me.

Serves 4 on their own or 6 with other dishes.

6 spring onions, cut into 4cm lengths and then shredded

Preheat the oven to 160 degrees Centigrade.

Dry the duck with some kitchen towel roll, pop the star anise into the cavity and rub the outside with the 5 spice powder, make sure it’s on the underside too.

Use a roasting tin with a rack, place the duck onto the rack and pop in the oven for 3 hours, uncovered.

After three and a half hours, turn the oven up to 220 degrees Centigrade, baste the duck and return to the oven to roast for a further 30-40 mins until the skin has crisped up. Allow to sit for 20mins and then pull off all the meat and skin, tearing into small bite sized pieces.

While the duck is roasting make the pancakes, in a bowl, combine the flour, water and egg using a fork, once it’s cool enough to handle, knead the dough for around 5mins and then set aside in a covered bowl for 30mins.

Roll the dough into a long sausage, around 3cm thick, and cut into discs, around 0.5cm thick.

Flatten a disc with your palm and wipe a little of the oil over it, pop another disc on top and using a rolling pin, roll out until very thin, repeat with the remaining dough.

Place the pancakes in the hot pan, spread out with no additional oil, cook for around 1min, flip over and cook for 30secs.

Remove from the heat and allow to cool a little in a clean tea towel.

Once the pancakes are cool enough to handle, peel the two pancakes apart and keep in the tea towel till needed.

Serve with finely sliced spring onions, cucumber and a little plum sauce and assemble your pancakes as you go along.